With long nights and (seemingly) constant rain, Portland winters have earned their dark and gloomy reputation. No wonder we’ve taken to the Portland Winter Light Festival so quickly.

Now in its fifth year, the Portland Winter Light Festival is a free three-day event that brings light-based art exhibits — including video projection mapping, fire and ice sculptures and illuminated parades — to our dark February nights. This year’s edition will be help February 6-8 — Thursday through Saturday — from 6 p.m. to 11 p.m.

Visually, it can be magical. It’s a kid-friendly activity that also appeals to all ages. It comes at a point in the winter when we all need an excuse to get outside and do something. There’s a great feeling of community around it.

The problem is that sixty percent of these attendees — about 90,000 people — arrived via car. The bulk of the exhibitions are in an area with limited road connections. That’s a recipe for big time traffic issues. 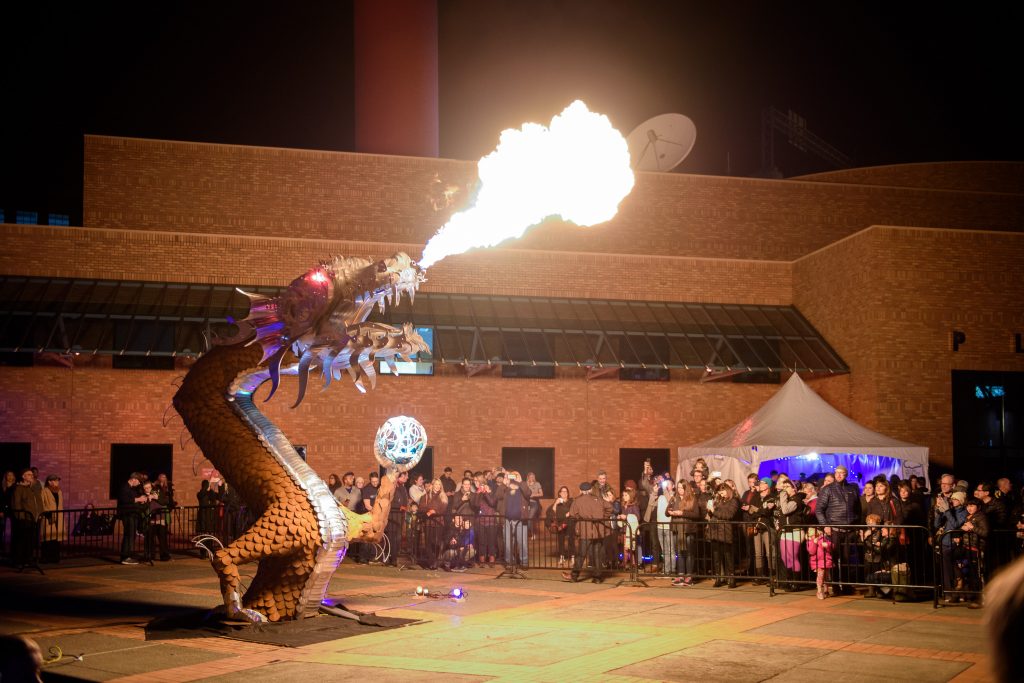 The Lay of the (Well-Lit) Land

The festival area around OMSI is known as the East Side. It has the most installations (including the Glow Bar pop-up) and spans the entire area from the Tilikum Crossing — whose lights are an immense art installation themselves —  to the Hawthorne Bridge. The West Side installations gather around the Salmon Street Springs part of Tom McCall Waterfront Park, as well as the World Trade Center buildings.

How to Get There (and Avoid the Traffic)

Drive at Your Own Risk

This is one event you do not want to drive to. On the East Side, Water Ave. is the only road in and out. OMSI’s paid parking lots will be open, but they’ll be first come, first serve; expect them to fill quickly. On the West Side, traffic will be a little less intense near Salmon Street Springs — but parking will still be hard to come by and potentially expensive (you are downtown, after all).

If You Live Nearby…

If you’re local, biking and transit are going to be vastly superior options. As long as you’re comfortable riding at night, biking lets you avoid traffic and parking issues, and you’ll be able to quickly move around the festival sites. The Hawthorne Bridge makes it a 5–10 minute ride between OMSI and the Salmon Springs Fountain.

If You Live Further Afield…

If you’re coming from further afield, you’re best off parking near transit and taking MAX or Portland Streetcar to the festival. Otherwise, you’re looking at a lot of circling for parking and a seriously long hike.

Fortunately for the traffic-adverse, the festival is extremely well served by transit.

Light rail to the Light Festival

MAX is one of the quickest ways to travel through downtown and the surrounding areas (thanks,  transit-only lanes!). It is also one of the best ways to get to the festival.

MAX will drop you off at or near both sites: Orange Line runs right by OMSI (it has a dedicated OMSI stop!), and Blue and Red lines are only two blocks away from Salmon Street Springs. And because MAX runs all the way through the city and beyond, it also makes it an easy option whether you’re near or far from the festival site.

If you’re driving part of the way, leaving your car at a Park & Ride and taking MAX is a great option. There should be plenty of open parking spaces at that point in the evening. Find a Park & Ride.

Here’s how to get to the festival locations via MAX:

East Side: Take the MAX Orange Line to OMSI/SE Water Station, at the east end of Tilikum Crossing.

West Side: Salmon Springs is a few short blocks from the Yamhill District station on MAX Blue and Red lines. Orange and Yellow lines are also a short walk away from the Salmon Springs hub via City Hall/SW 5th & Jefferson or SW 6th & Madison stations.

Traveling Between East and West: MAX also provides a quick connection between the main festival locations. Orange Line runs through the OMSI hub, and there are stops a few short blocks west of the Salmon Springs installations (City Hall/SW 5th & Jefferson or SW 6th & Madison stations).

Portland Streetcar provides another solid transit alternative, especially as it will be free after 5 p.m. during the festival. It runs right by OMSI and is within walking distance of Salmon Springs. You can check the full Portland Streetcar routes, schedules and arrival times here.

If you’re coming from a close-in Portland neighborhood, parking near Streetcar or taking the bus to Streetcar and using that as your ride to the festival will likely be easier than taking MAX. Look around the Pearl or Nob Hill for parking around the NS line, or near the Lloyd District on the A and B loops.

Here’s how to get to the festival locations with Streetcar:

East Side: Portland Streetcar runs through the OMSI hub of the festival, with A and B loops stopping at the OMSI/SE Water station just a few feet away from the Orange Line.

West Side: The SW Harrison stop is the closest on Streetcar to the Salmon Springs hub. Hop off there and walk the quick half mile over.

Travelling Between East and West: The A and B loop will take you right across Tilikum Crossing, stopping at both SW Harrison and OMSI.

Portland Spirit will be running the Crystal Dolphin as a free ferry shuttle between the East Side and West Side during the festival. The ride takes about 15 minutes, with the ferry leaving each location every 30 minutes. Catch the ferry just south of Tilikum Crossing near OMSI or at Salmon Springs Dock.

We just threw a lot at you, so here’s a handy cheat sheet:

Best overall ways to get to the festival: MAX, Portland Streetcar or bike.

Best bet for driving to the festival: Drive to a Park & Ride and take MAX.

Options for getting between OMSI and Salmon Springs: Ferry, MAX Orange Line, Streetcar or bike. Spends her free time reading and going to bar trivia, and gets her best ideas while riding the bus.