The Inside Story of the Robertson Tunnel, Part 1: Construction 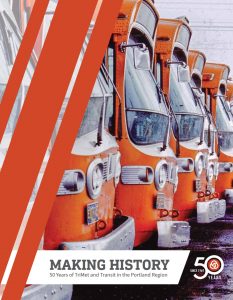 The Robertson Tunnel is a marvel.

This tunnel through the West Hills – allowing MAX to extend from Portland to Beaverton and Hillsboro — is nearly three miles long and drilled through challenging and often unstable earth.

At 259 feet deep, Washington Park MAX station in the tunnel is the deepest transit station in North America (and the fifth deepest in the world).

How this tunnel came to be is a story of creative problem-solving and persistence. To tell the story, we turn to Making History: 50 Years of TriMet and Transit in the Portland Region.

In Part 1, we explore the actual engineering and construction of the tunnel. Part 2 will pull back the curtain on the political maneuvering locally and in Washington D.C. that was necessary to make the tunnel a reality.

As the new millennium approached, TriMet began to expand the MAX light rail system. Planning for a MAX extension west to Beaverton and Hillsboro had begun in 1979, in parallel with consideration of the original Banfield line. The alignment would present a great challenge: how to get over—or, as it turned out, through—Portland’s West Hills. A surface route had been considered but had the disadvantage of requiring large retaining walls and a steep (six percent) grade rising 700 feet in a narrow and sometimes icy canyon next to the Sunset Highway. The solution offering greater service reliability and lower cost operations was a three-mile twin-bore tunnel. 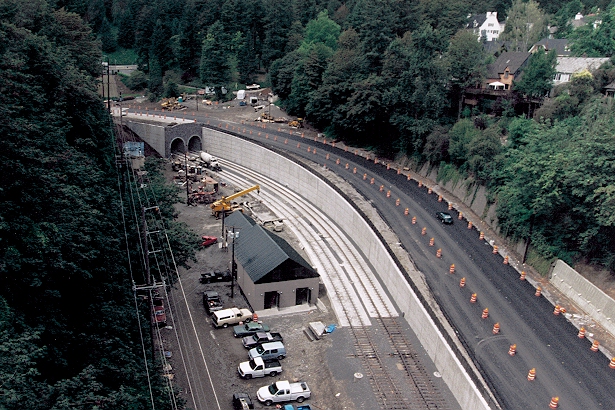 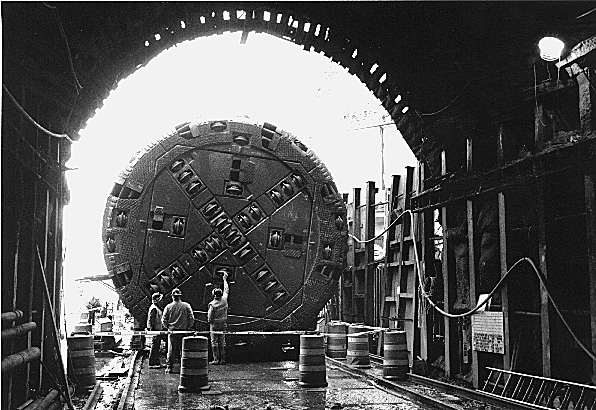 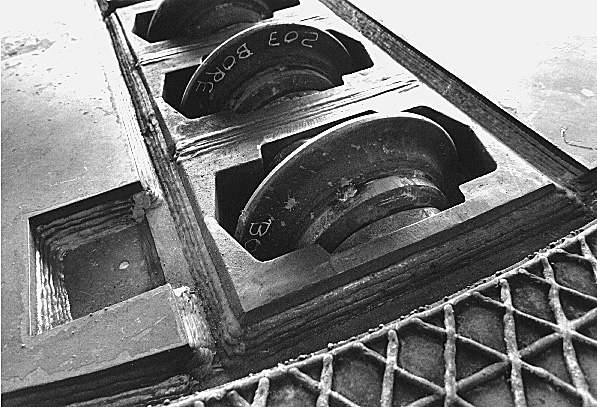 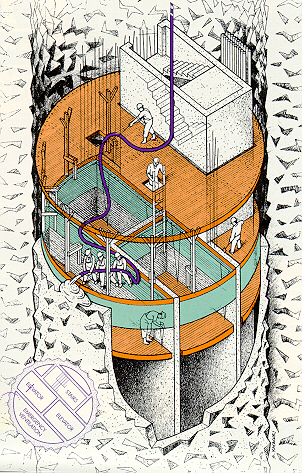 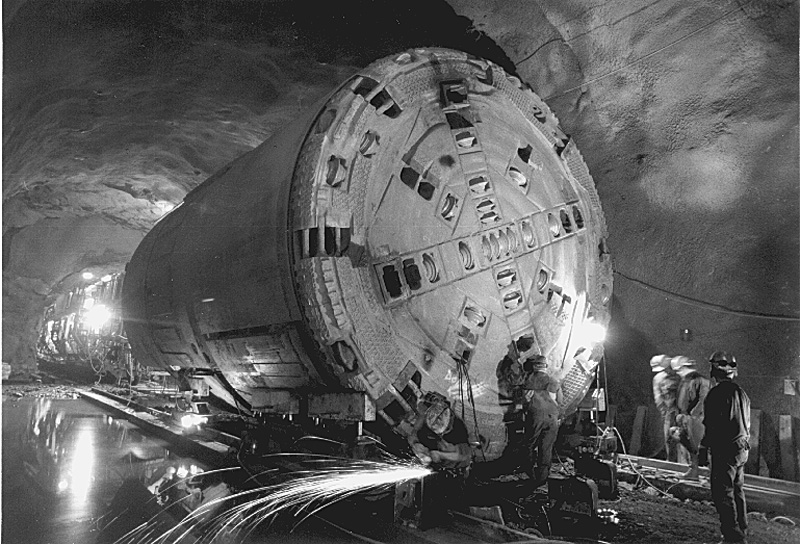 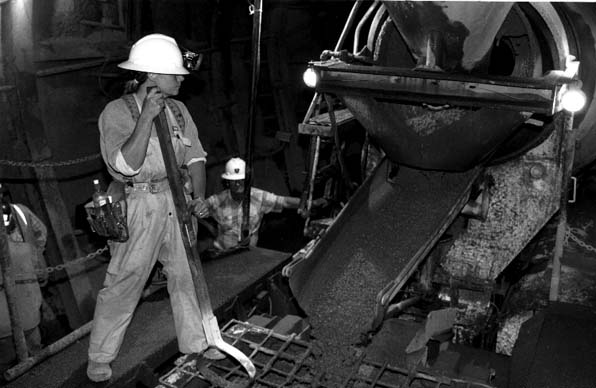 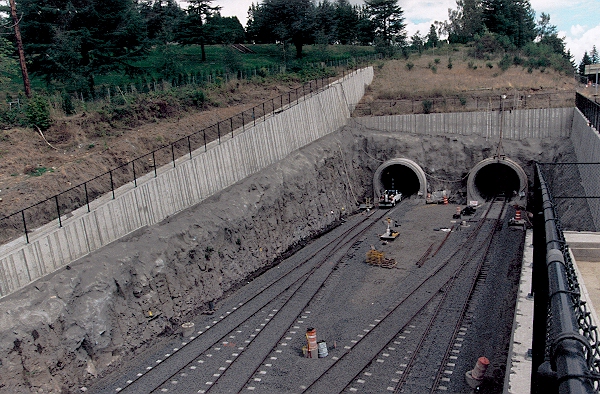 Over — Or Through — The Hills to Hillsboro

Geologists suggested using dynamite to blast through the westernmost mile of each tunnel. They recommended an impressive 278-foot-long tunnel boring machine, affectionately named Bore-Regard, to drill the two miles from the east portal. Even with information from 80 test bores predicting geologic conditions for the 21-foot diameter tunnels, Bore-Regard found the west hills rock to be looser than anticipated. The machine had trouble pushing its way through the initial run of rock. Unexpected difficulties arose almost immediately after construction began and snowballed as the project progressed. The fractured rock under Portland’s west hills didn’t hold its shape as geologists had expected, instead falling apart in front of the boring machine. Rather than a solid wall of basalt, the machine’s ultrahard carbon steel cutting head encountered piles of crumbled rock and enormous empty voids. Project Director Tuck Wilson described the situation as trying to tunnel through a hill of popcorn kernels.

After much trial and error, the tunnel crew tried the crazy idea of running the boring machine’s cutting head backwards, allowing the rock to essentially fall into the debris scoops on the cutter face. This innovation was not enough to fix the problem, and the machine continued to progress at a snail’s pace. TriMet brought in engineers from all over to brainstorm solutions. One of the suggestions was to shoot plastic in front of the machine to hold the rock together. This was tried and it produced combustion and deadly gasses, requiring the tunnel to be shut down and huge fans brought in to evacuate the bad air.

After a long nine months, an engineer from Italy came up with the winning strategy: injecting fast-acting shotcrete ahead of the machine and allowing it to set before being attacked by the boring machine. This held the rock together and allowed the carbon steel to do its job. Eventually the boring machine made it through the fractured rock and into more favorable strata, where it picked up speed and made up much of the time lost during the early months.

Progress of tunnel construction was a little smoother at the west end. Noise from tunnel blasts awakened and disturbed people in houses near the tunnel portal. Blasting was halted until heavy rubber curtains could be installed to dampen the noise. The 260-foot-deep station at Washington Park, the deepest in North America, required special soil nails to stabilize the landslide-prone slopes around the station.

The tunnel would be named for long-time TriMet board member Bill Robertson. With some fine-tuning and removal of desirable but nonessential project features, the project was completed on time and within its overall $963 million budget. In August 1997 Westside MAX opened as far as the Kings Hills/ SW Salmon Street station on 18th Avenue, running the first low-floor cars. On September 12, 1998, the full 18-mile extension opened from downtown Portland through Beaverton to Hillsboro, serving the fast-growing high-tech corridor in Washington County. The Westside MAX extension connected with the eastside line in downtown Portland, creating a single 33-mile alignment that would eventually be called the MAX Blue Line. The Westside MAX line was an instant success. The new low-floor light rail cars were popular. Ridership on the east side jumped, now that a convenient through east-west connection was available. The beginning of a light rail system was evident.  In 2000 Westside MAX won the Presidential Award for Design Excellence and the Federal Design Achievement Award.